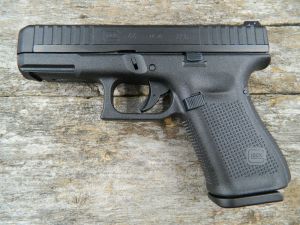 While on my way to SHOT show this year, I had a few things that I was very interested in. One of those was the Glock 44, this is Glock’s newest entry into their pistol line. What makes this one different though is that it is chambered in .22 long rifle. That’s right, a dedicated .22LR from Glock. No more having to convert your standard Glock into a .22LR via a conversion kit (that costs almost as much as what the G44 will cost at most retailers).

During Industry Day at the Range, I headed to the Glock range to get my hands on the G44. From the outset, it has the same feel as my G19, although lighter. The sights are easy to see and it just feels good in your hand. I grabbed a couple of magazines and went to work on the automatic reset targets provided. Again, while shooting it, it felt great. I didn’t feel like I was shooting a toy gun or and airsoft gun. The recoil is mild, as you would expect of a .22LR, and it was easy to move from target to target. 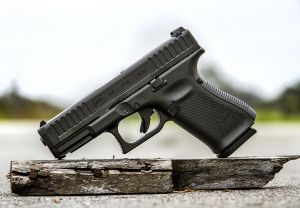 As I finished with both magazines, I had a chance to chat with one of the Glocks RSOs about the G44. I asked about aftermarket sights and was told that it is not recommended due to the polymer upper receiver. Pushing normal aftermarket sights into the dovetail could shave off the polymer and cause the sights to loosen over time. The good news is that the sights on the G44 are very easy to pick up, and the rear sight is adjustable.

A second feature that I appreciated was that the G44 can still fire with a round in the chamber but the magazine removed. With several of the other .22LR pistols I have, the gun will not fire with the magazine removed. While this is not a huge deal, it could be an issue if you end up using this gun for self-defense. Yes, it is possible to use for self-defense, look at the CCI Velocitor or Stingers. The other nice feature of the magazine is the loading assist feature to help push the follower down as you load. It makes loading a breeze.

The third thing plus is that the G44 will fit into my G19 holster, that is a savings in my book. Same goes for the magazines that will fit into your G19/17/34 magazine holders. If you have ever tried to get a dedicated holster for a .22LR pistol, you know it isn’t easy to find. Very few stores stock them and very few companies make them. In case you were wondering; no, you cannot swap out your G19 and put the G44 slide on it. First is won’t quite fit and second the internal workings are a bit different. That being said, it breaks down very much the same as your standard Glock, into its components of slide, barrel, recoil spring assembly and frame. Cleaning it is simple and straight forward, as is re-assembly.

So, did I like the G44? Absolutely! So much so that I bought one the very next day after I returned from SHOT. I couldn’t wait to get it out and get some rounds downrange. The first day I put 200 rounds through it of various ammo (CCI, Winchester, Federal, Aguila and Remington), without a single jam or misfire. The G44 is accurate straight out of the box, it comes standard with the GLOCK Marksman Barrel (GMB) for increased accuracy and precision. While I only tested it out to 10 yards, it consistently grouped less than 2 inches while firing with a two-handed grip. Since that day, I have put another 500 rounds through the gun with only a wipe down between sessions and then a very light coat of lubricant. I have to say that I am very impressed with the G44. Not every .22LR pistol will fire just about every .22LR round put before

it. According to Glock it will eat all but the very cheap ammunition. Based on my testing, I would have to agree.

A little light, but still feels like a Glock 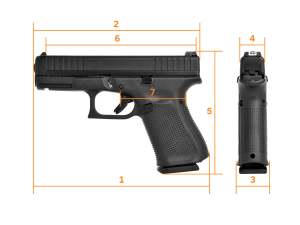 One of the things that you will notice on the G44 is the stark difference in the weight of the slide compared to other Glock pistols. The majority of the slide is made of polymer with a thin (quarter inch) piece of steel on the bottom that rides on the lower mechanics of the pistol. There is also a loaded chamber indicator, different from what you may be used to with your standard Glock. Instead, there is a small “ghost hole” when looking down on the top of the slide that you will be able to see a round in the chamber.

What’s in the box

The G44 comes with 2 magazines and additional magazines should be shipping to your dealer shortly, if they don’t already stock them. Glock is also producing threaded barrels for those of you who need your .22 just a little bit quieter. Like the magazines, your dealer either already has them or they will be there soon. Lastly, the G44 ships with two additional backstraps so that you can adjust the grip to fit you.

If you are looking for a .22LR for plinking purposes, or to augment your training (at a much lower cost) you can not go wrong with the newest edition to the Glock lineup. When training you have to master the fundamentals of marksmanship (Grip, Stance, Sight alignment/Sight picture, Trigger Control, Follow-through, Breath Control, Shooting Rhythm, Shooting Positions), not having to add in recoil managements helps to concentrate on the others. If you are out to get a G44, the price is well within reason and it is just plain fun to shoot. 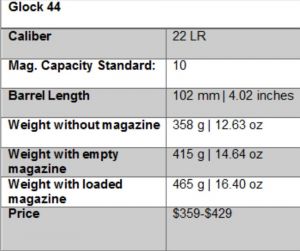