What’s the story behind the M17 Surplus?

Beginning several days ago, we received messages from many of you looking for the
Sig Sauer M17 “Surplus.” I’m happy to report that Shoot Center WILL be receiving at least (1) of these units. We hope for several more. As the contract between Sig Sauer and the US Army matured, the Army requested the new darker controls for their existing M17 units. Efficiently, Sig decided to swap the old M17s with new models. And what a clever move as well. Now Sig can sell these models back to the public, as a special offering!

As you know, the US Army selected the M17  to fill their Modular Handgun System (MHS) contract. Based on the P320, Sig Sauer says the M17; “was selected for its uniquely innovative modularity, uncompromising performance, and unmatched capability.” Sig Sauer says publicly that over 100,00 units have been shipped to the military.

How many are there?

But what is meant by “surplus” anyhow and why should anyone care? At first, we just assumed these were some sort of a military contract “over-run.” We immediately  contacted Sig and asked about the quantity available and number of units to be produced. And the answer was, “3,000 units only, limited run.” 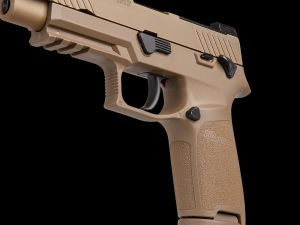 Did they see “action?”

According to Sig Sauer, they have shipped the M17 models to US Army Infantry units such as the 82nd Airborne and 101st. This creates the possibility of receiving a gun with actual wear from use. Some will likely be “new in box.” Also, many of these guns have been “issued” to soldiers and there are rumors that some may have even seen service overseas. Either way, these types of things could increase value.

What comes in the box?
The gun will ship in its original configuration, and with all “coyote tan” controls. This means that the slide catch lever, manual safety, the back slide cap, the sear housing, take-down lever, trigger, ALL finished in the the original coyote tan.  The M17 was also “tested and configured” to go be used with the high pressure, military spec “+P” ammunition. Included is an additional guide-rod assembly, for those non +p training days… This allows the user to quickly swap out to a new guid-rod with spring resistivity rated for regular 9MM. The owner’s manual and “certificate of authenticity” are included as well. Standard (1) 17rd and (2) 21rd magazines are included. 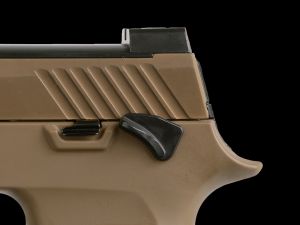 This certainly piques the interest a bit, doesn’t it? Who wouldn’t want to own a small piece of history? Here is a bit more “insider info,” these guns are ONLY going to certain wholesalers (we won’t say who). But, Sig is NOT selling any commercially! Oh, we almost forgot, the serial numbers on these are “contracted serial numbers.” The models also have unique government markings on the slide. 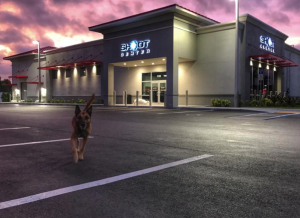 So where can I buy one?